My breeders were paired November 28th in 2008. That’s early in the season, I know, but I had that in mind for quite a while. Three months in advance they were separated, for me that is rest enough.

The thought of pairing up the breeders so early, was starting the young bird season with ‘older youngsters’. Last year I had quite a few health-problems with the youngsters. Looking back, I think the cause was me trying to get them back on track with rest and natural means. I should have treated them earlier and therefore I lost about 10% of all my youngsters, and there was no need for that.

These experiences made me decide to keep myself to a few codes:You

1. Breed early.
2. Start training the youngsters at an early stage; the first training race was 8 weeks ago.
3. Re-make the situation of transport. Make the youngsters get used to the basket and learn them how to drink in the basket.
4. Darken the youngsters up to July 1st, 14 hours a day. Per week I correct the times with 2 hours. Practically this means 1 hour in the morning and 1 hour in the evening extra. Within 3 weeks I follow the natural day and night rhythm.
5. Separate the pigeons after the second race.
6. We changed some other things, when we are convinced they are the right thing to do, I will let you know.

Until 1 week ago the youngsters did very well, but on one training race they came in a bit slow. Later some wounded youngsters came in and of the 80 trained youngsters, I than lost 15. Since that day we only train the youngsters in groups of twenty, to prevent this happening again to the entire group.

At the moment some youngsters are not very comfortable. I now gave them a treatment to prevent further coli problems.

How it will end? We know more in 6 weeks. 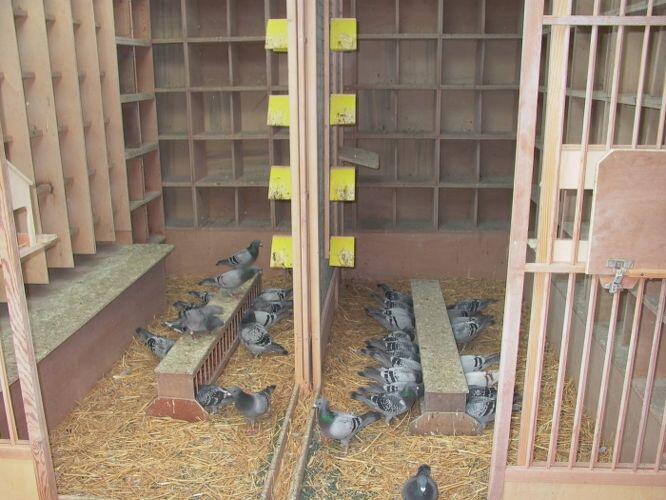